This was a very useful exercise, I posted on Thursday asking for some help with this image. I realize now, I was so fixed on the rocks and timing the wave splash that I didn’t pay attention to where they were in the frame. Oh, so much to learn…

The comments were very useful, and I tried to take into account each of their suggestions. This resulted in two images, one vertical and one landscape. First up, the vertical image. There is an interesting diagonal line that comes forward when the image is cropped this way, I didn’t see it until it was directly pointed out. I suggest scrolling to the bottom of the image and moving your way up to get the full experience.

I do find this perspective interesting, the rocks lined up diagonally are really great. But, my favorite part of the original image is the light on the largest rock in the left hand side of the image. I feel like the sky is big and needs a bigger focal point to ground the image than is provided in this vertical one. 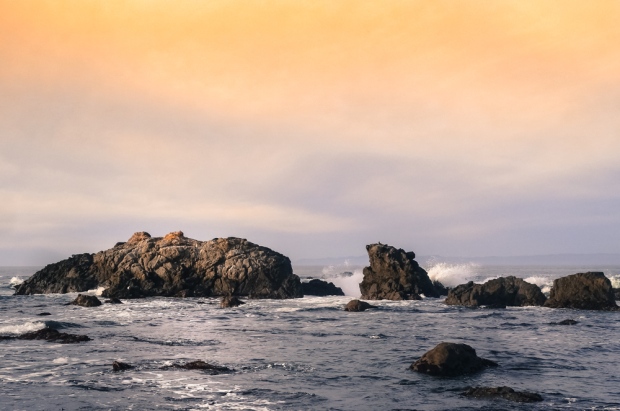 This is what I was wanting to see when I originally tried cropping. The horizon moved away from the center point of the image, enough ocean and foam to know it is there and the sky elements represented too.

Thank you to those who offered their perspective and suggestions, I really appreciate it. I would love to hear what you think about these two versions. Now, on to the next project.